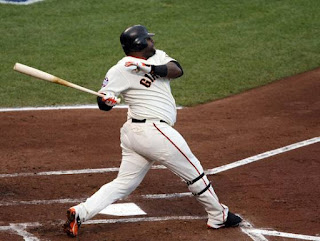 An historic effort in one game, plus an overall week of World Series MVP-level play from Pablo Sandoval thrust the Giants past the Cardinals and Tigers to win their second title in three years. The most historic moments came in World Series Game 1 against the usually invincible Justin Verlander in which Pablo hit three home runs in his first three at bats (2 on Verlander), each pushing the Giants more in control if the momentum setting game. For the week he batted .450 (9/20) including the final game against the Cardinals. A historic baseball performance and deserving Longhorndave Sportsman of the week!
Posted by longhorndave at 9:44 PM