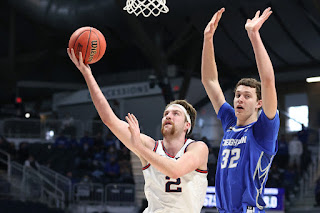 Another week of March Madness and we can't get enough of the action.  In the backdrop, top national seed Gonzaga is pushing to be the first undefeated NCAA Men's Basketball National Champion team since 1976.  So far this season, only one team has kept the Bulldogs within 10 points.  Neither of the teams they played this week kept them that close.  Led by Sportsman of the Week Drew Timme, Gonzaga averaged 17 point victories over the 8 seeded Oklahoma Sooners and 5 seeded Creighton Blue Jays.  Timme filled the box score in all categories, averaging 26 points (30 vs. OU, 22 vs. CU) and 9.5 rebounds.  He also got 4 assists per game so he wasn't greedy.  Gonzaga has long been a tournament darling but plays the favorite as they try and navigate to their first National Championship.  It will be Timme and teammates that can make it happen, he is a worthy Sportsman of the Week!
Posted by longhorndave at 8:07 PM