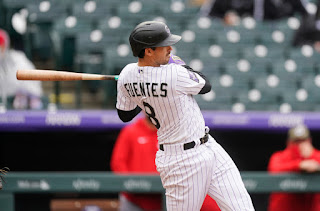 As a period of transition engulfs the Colorado Rockies franchise with the loss of key players, corner infielder Josh Fuentes stepped up to deliver a decent week for the struggling ball club.  With the Rockies floundering with the worst record in Major League Baseball, Fuentes put his team on his back for the week and led them to a 3-2 record by going 11-22, 2 HR, and tallying two or RBI in each game he played (13 total in five games).  His May batting average is warming up with the weather now at .347 to offset a struggling May.  The Rockies aren't going anywhere this year, but Fuentes is a player to watch, and the Longhorndave Sportsman of the Week!
Posted by longhorndave at 7:46 AM