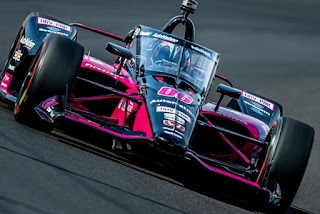 An epic weekend of sports commenced on Memorial Day weekend, unlike 2020 in which the country was imperiled with COVID shutdowns.  Memorial Day always anchors the Indianapolis 500 and this year's race more than lived up to the billing.  Historic even.  As Brazilian Helio Castroneves won his career record tying fourth Indy and the first in 12 years.  And he did it with style.  In what many described as the most entertaining (and statistically fast) race in recent memory as there was lots of action and passing rewarding 135K (partial attendance) fans who waited after missing last year.  The 46 year-old Castroneves beat out young stars like Alex Palou and Pato O'Ward to show experience over youth.  The race featured intriguing pit strategies but at the end, it was tactics and timing and the veteran shined.  Helio Castroneves is the Longhorndave Sportsman of the Week!
Posted by longhorndave at 9:14 PM