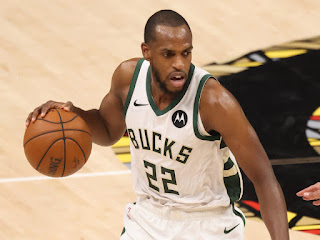 The NBA Finals are on tap to start this week, and two surprise teams punched their ticket to the finals.  One team did so without their biggest star in the final, clinching Eastern Conference Final games.  The Milwaukee Bucks lost two-time NBA Most Valuable Player Giannis Antetokounmpo to a knee injury in Game 4 and needed someone to step up.  That someone arrived in the person of Khris Middleton, our Sportsman of the Week. Middleton put the Bucks on his back to lead them past the resurgent Atlanta Hawks (who were buffered by the return of their star Trae Young in Game 6).  Over the Games 5 and 6 which punched the Bucks to their first finals since 1974, Middleton 58 points and 17 rebounds in the double digit victories.  Playing team ball, he also contributed with 15 assists when the Hawks tried to shut him down.  It's unclear whether Antetokounmpo will return to help the Bucks in the Finals, so it may be Middleton's stardom needing to shine if the Bucks are to get their first NBA title since 1971.
Posted by longhorndave at 12:45 PM