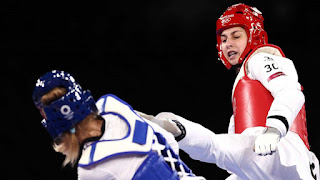 Sports fans around the world has waited in anticipation for the quadrennial Summer Olympic Games and in these times, had to wait an extra year.  The Tokyo 2020 Olympics kicked off this weekend a year late without fans, but with the competition as fierce as ever.  One of the early surprises in the Games was the emergence of a young, American woman who won the first ever female gold medal for the United States in Taekwando.  Anastasija Zolotic of Colorado Springs, CO, bolted through the competition, beating the World #2 in the semifinals and World #4 in the final match.  The 18 year old Zolotic has surged to the top in winning junior competitions three years ago, and won a championship at the Pam Am Games in 2020.  Zolotic is probably a name you didn't know a week ago, but represented the United States well and is the Sportswoman of the Week!
Posted by longhorndave at 6:28 PM