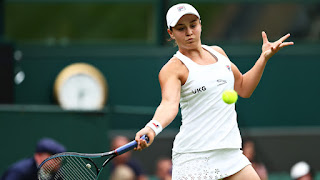 What a fortnight in England for the number one seed in a dominant effort to take home one of Tennis's most prestigious trophies.  Ashleigh Barty stormed through her seven matches and three seeds to win her second major, but first Championship of the All England Club also known as Wimbledon.  Barty stumbled out of the game needing a full three sets to win her opener, then didn't drop a set until the finals.  She jumped out to an early lead against 8 seed Karolina Pliskova then didn't look back, taking the first and third sets 6-3.  The Australian Ash notched her second Grand Slam tournament adding to her 2019 French Open victory.  I'm going on a limb to say it won't be her last, and she is a dominant Longhorndave Sportswoman of the Week!
Posted by longhorndave at 7:59 PM