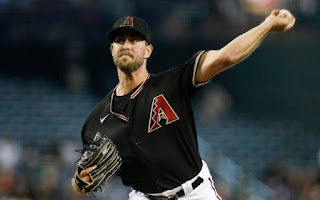 It's been a while since we've featured a No Hitter in the Blog, but here we are again.  This time the rub is, there was no way to expect it.  The Arizona Diamondbacks are the worst team in baseball.  They have been in rebuild mode for a few years and this second half is just the dog days of summer.  So all the better to have something to reward their patient fans.  And Tyler Gilbert did just that.  In his first career start, he tossed a no hitter against playoff contending San Diego Padres.  It was the first pitcher to throw a no hitter in his first career start since 1953.  And with eight no hitters, the season with the most no hitters since 1900.  Without overpowering stuff, walking two, but no hits.  What a day for the Diamondbacks and for Gilbert and what a great day for Baseball.  Tyler Gilbert is the Longhorndave Sportsman of the Week!
Posted by longhorndave at 9:11 PM