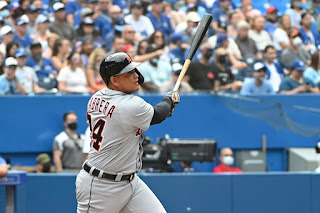 There may not be a more appropriate 500th Sportsman of the Week than to look to a man who hit his 500th Home Run this week.  You can't make this up.  Miguel Cabrera etched his name next to baseball elite when he clobbered his milestone home run.  He was a hero in 2003 when he emerged as a post season phenom in securing a world Series for the Florida Marlins, and now he puts another stamp on his Cooperstown passport in getting 500 home runs.  Cabrera clobbered number 500 against Toronto Blue Jays hurler Steven Matz in a game in which the Tigers won in a resurgent season as they rebuild.  Next up. 3000 hits hoping to become the (Aaron, Mays, Palmeiro, Murray, Rodriguez, Pujols, and two of those have some PED issues.)
Posted by longhorndave at 10:23 PM