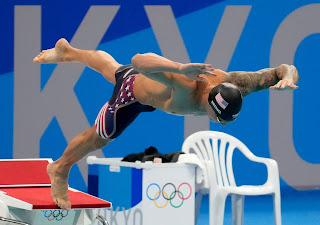 The first week of the Olympics is usually defined by swimming greatness, and the United States is historically a big player.  The Tokyo 2021 (err 2020) Olympics did not disappoint.  Caeleb Dressel led the American charge with a five Gold Medals across his myriad of events.  Exceeded in one Games only by American swimming legends Mark Spitz and Michael Phelps.  The best freestyle swimmer in the World, he won the 50m and 100m, while also collecting a Gold on the 4x100 freestyle relay.  Butterfly his next best stroke, winning the 100m and contributing to the epic medley relay Gold in which the United States has never lost but is facing larger and larger challenges.  Dressel won every event he entered besides the 4x100 mixed medley, a new event in which the United States finished a disappointing fifth.  In any event, Dressel has etched his name in United States Olympic history and is a worthy Longhorndave Sportsman of the Week!
Posted by longhorndave at 8:55 PM