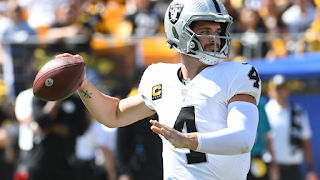 The first two weeks of the NFL has provided a number of tight games, upsets, surprises and top performances.  And upsets.  Two of the biggest wins so far have been executed by the Las Vegas Raiders led by our Sportsman of the Week Derek Carr.  Shuffled a tough schedule to start, hosting the formidable Baltimore Ravens on Monday Night Football, then travelling to menacing Pittsburgh for a noon start (over three time zones) to face the Steelers.  2-0.  After a thrilling overtime on Monday Night, including 10 points in the last 4 minutes, including a last minute FG drive for the tie, Carr led his team to a 33-27 victory essentially twice as a TD was overturned the Raiders survived a Ravens possession to win on a 31 yard TD pass.  Head to Sunday in Pittsburgh in which Carr led a workmanlike effort to down the Steelers with ease 26-17.  Two of their biggest contenders behind them, the Raiders schedule lightens up.  Carr has clocked a 66.7% completion rate, 817 yards (that's over 400 per game) and 4 TD.  The Raiders have vaulted themselves into contention in the AFC, two showdowns with the Kansas City Chiefs loom but Derek Carr is the Longhorndave Sportsman of the Week!
This is Derek Carr's second Sportsman of the Week honor and at eight years, believed to be the longest duration between as he was the 91st Sportsman of the Week in 2013!
Posted by longhorndave at 9:49 PM