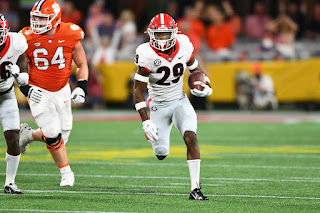 In the biggest game of the college football kickoff weekend, the biggest win was by the Georgia Bulldogs.  Led by their defense, they defeated the defending ACC Champions 10-3 in an effort that felt like the Tigers couldn't score if they had 40 quarters instead of four.  While the Bulldogs offense struggled, their defense struck for the only touchdown of the game in a big win over the Clemson Tigers 10-3.  Senior Chris Smith made a quick break on a ball and did the rest with his legs and blocks in scoring a classic "Pick-6" which was the difference in the game.  While certainly his effort wasn't the only part of the defensive domination, he represents the Dawgs in their big win and made a huge statement in being SEC East Favorites.  Chris Smith is the Longhorndave Sportsman of the Week!
Posted by longhorndave at 10:30 PM