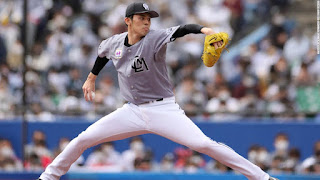 Another amazing week in sports, especially American sports, but we go over to the Pacific Rim for an amazing, near impossible or stuff of legend, story.  Nippon Professional Baseball (NPB) has started just like the American Major League Baseball but has a story never matched.  20-year-old pitching phenom Roki Sasaki (佐々木) of the Chiba Lotte Marines in his second and third start of the young season pitched 17 consecutive perfect innings.  Read that again.  17.  Consecutive.  Perfect.  Innings.  Sasaki pitched the 16th perfect game in NPB history (first since 1994, 7+ years before Sasaki was born) on Sunday April 10, on a magnificent 19 strike out (including 13 straight) 27 up, 27 down performance.  He followed it a week later with 24 up and 24 down before being lifted (by his own admission suffering "some fatigue") in a 0-0 game.  For a young arm like that, discretion is definitely warranted.  What will Sasaki do for his next act?  Check it out on Sunday for his next start.  And maybe in a Major League Baseball ballpark in the not-too-distant future!  Sasaki is the Longhorndave Sportsman of the Week!
Posted by longhorndave at 8:37 PM