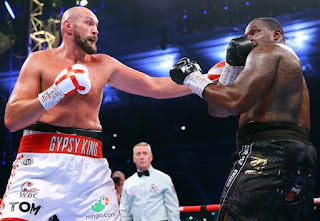 In one of the grandest and most traditional sports, perhaps one of the greatest in that sport etched his name into history in what may be his final competition.  Tyson Fury proved his heavyweight boxing championship meddle with a 6th round knockout of contender Dillian Whyte in front of a phrenetic 90K plus home crowd at England's Wimbley Stadium.  Whyte seemed overmatched by the largish champion Fury as he faced a constant barrage of punches, with 76 landing including 47 power punches.  As the waning seconds of the 6th round ticked down, the referee stopped the fight for a TKO.  Fury finishes his career undefeated, with a 32-0-1 (only 10 fights going the distance, none lost).  In an era where boxing is finding itself among other combat sports, Fury ends with a record in some of the annals of history.  And is a worthy (second time) Sportsman of the Week!
Posted by longhorndave at 8:27 PM