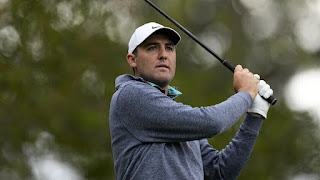 What a week of sports.  It started with the NCAA Men's Basketball finals, transitioned to the Major League Baseball Opening Day, but finished with the iconic Masters tournament, the first with full fans in 3 years.  And it did not disappoint.  The surging best player in golf lapped the field to win not only his first Masters, but first major.  Scott Scheffler has been one of the best up and coming golfers for over a year now.  Including his inclusion on the dominant American Ryder Cup team in which his inclusion was questioned, as usually spots go to veterans, to a 4-0 matchup performance.  But in Augusta, he was unmatched.  Consistency, big shots, and nerves of steel, and talent.  Lots of talent.  Scheffler is one of the next generation greats, and a worthy Longhorndave Sportsman of the Week!
Posted by longhorndave at 8:36 PM