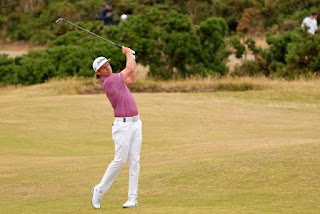 Another week, another trophy for winning a major British tournament.  This time, The Open Championship held at the Old Course in St. Andrew's, Scotland.  Not just any Open Championship, the 150th Open Championship.  With a field full of the world's best golfers (now across two major tours), it was a first-time major winner that stole the stage.  Cameron Smith surged on Sunday from the second-to-last group to overtake the two Saturday clubhouse leaders clear by two strokes.  Turns out, his biggest competition was from his pairing partner, Cameron Young.  The two Cameron's surged past former Open Champion and four-time Majors winner Rory McIlroy and his pair Viktor Hovland to win first and second.  But it was the Australian Cameron who took the Claret Jug.  Smith posted his second 64 in the last three rounds to finish an astounding 20 under par.  This was after his putter largely abandoned him on Saturday or it would have been even more of a runaway.  The 28-year-old smallish Smith with the wispy mustache and Joe Dirt hair showed he can play with all of golf's big boys and is the Longhorndave Sportsman of the Week!
Posted by longhorndave at 6:27 PM