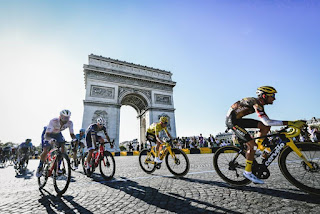 Another week, another major European sporting event leads to our weekly honors.  This time, on the Champs-Elysees in Paris.  After three weeks of grueling mountain climbs, sprints, and time trials, the Tour de France wrapped up with a surprise first time Champion.  Jonas Vingegaard of Denmark defeated the two-time defending champion Tadej Pogacar in several thrilling climbing duels over the Tour.  Stage 11 proved to be the decisive blow in the Alps, as Vingegaard and his Jumbo Visma teammates outnumbered Pogacar and gapped him by nearly 3 minutes which was more than enough to take the Maillot Jaune for good.  Pogacar attacked as he could the remainder of the tour, but Vingegaard was too much.  Pogacar settles for the white jersey for best young rider, and Vingegaard thrusts himself into Tour de France immortality and is the Longhorndave Sportsman of the Week!
Posted by longhorndave at 8:35 PM