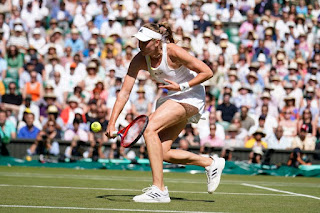 The Wimbledon (tennis) Championships is always one of the most elite titles in sports and 2022 delivered the first normal tournament in 3 years.  It's not often that a lower seed runs through the brackets, but just that happened on the Ladies side.  Elena Rybakina entered the tournament at approximate 100:1 odds to shock the tennis world and win the Championships.  Rybakina did not exactly storm through the 128-lady field, needing either a tiebreak or third set to win five of her seven matches.  Including twice in the final three matches going down one set to love.  In the finals against favoured Ons Jabeur, the Kazakh established superiority with consecutive 6-2 sets to raise the trophy.  The Championships were her first tournament win since 2020 and only her third in her career.  Is the 23-year-old just coming into her own or just put it together for one week?  Time will tell, but she is the Longhorndave Sportswoman of the Week!
Posted by longhorndave at 9:13 PM