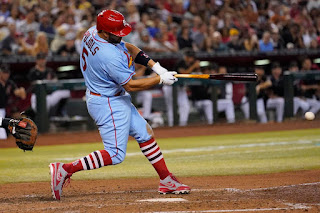 In an incredible defiance of father time, our Sportsman of the Week whipped up an assault on the hallowed Major League Baseball record book unmatched by any (non-PED) players of all time.  The St. Louis Cardinals Albert Pujols slugged the ball like it was 2012.  Or even 2002.  The 42-year-old had an amazing week for the surging St. Louis Cardinals that have taken a lead in the National League Central that might not be given up.  From Sunday August 14 through Sunday August 21, the machine was 10-17, with 5 HR and 11 RBI.  His OPS surged from .743 to .863 in just that one week.  The most important thing, the Cardinals went 7-0, and are now 14-1 in games in which he played over the last couple of weeks.  In a season in which he promises to retire, he looks like a man in his prime.  And he is a worthy (first-time) Sportsman of the Week!
Posted by longhorndave at 10:02 PM