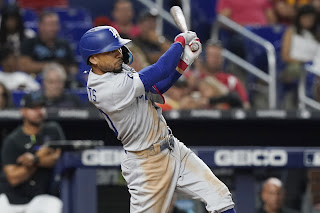 The Los Angeles Dodgers, probably the model franchise alongside the Houston Astros over the last 7 years, are completely dominating the 2022 season.  Now 50 (!) games over .500 the only question is whether their pitching will be as healthy as it needs to be to beat the Braves, Mets, and Cardinals.  But their hitting is fine, thanks to their MVP candidate (not likely to win) Mookie Betts.  Betts is in line for his fourth Top 5 MVP finish in five years surpassing his career high in home runs and likely leading the league in runs for the third time in five years.  This week, Betts went 9-27. with 3 2B and 4 HR, but most of the damage was done over the weekend series against the Miami Marlins where he went 8-15, 2 2B, 4 HR, 5 R, 7 RBI. Team went 4-2 scoring 40 runs in the wins, just bludgeoning opponents.  Will Mookie win his 3rd World Series Championship in 5 years?  He will certainly have a say in it and is the Longhorndave Sportsman of the Week!
Posted by longhorndave at 8:43 PM