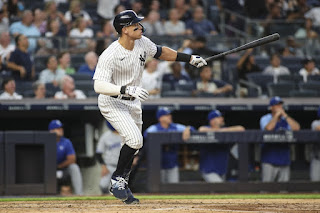 Baseball takes center stage as we transition toward late summer before the fall sports start.  And nobody has been a better hitter in baseball than Aaron Judge.  The Free Agent to be is putting together an historic season (that surely will result in a huge payday from the New York Yankees or otherwise).  Judge continued to torment pitching with another amazing week, netting him his second American League Player of the Week in a row.  This week, Judge was 8-23, with 5 HR, 7 runs and 10 RBI in six games.  For the season, up to 42 HR and 91 RBI, a great season and there is two months left!  Will he surpass the Yankees team record of 61 Home Runs?  Will he win the MVP over Shohei Ohtani?  Odds are yes to both, but Judge is the Longhorndave Sportsman of the Week!
Posted by longhorndave at 8:04 PM