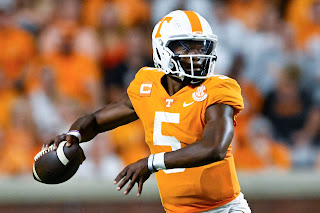 In one of the best October weekends of college football in recent memory, a traditional power rising back to glory got their biggest win in a decade or more.  In what is one of the biggest rivalries in college football, the Tennessee Volunteers finally overcame 15 years of frustration and adversity in a thrilling defeat of the perennial power Alabama Crimson Tide 52-49 in front of a raucous home crowd.  The Vols were led by senior QB Hendon Hooker who was nothing short of spectacular.  Against a perennially strong Alabama defense, Hooker lit them up for 21-30, 385 yards, and 5 TD.  He also kept 14 times for another 56 yards ending at 441 total yards for the game out of his team's 567.  The Vols have surged to the Top 5, and will have many more big games left including a showdown with Georgia and an SEC title game.  But Hooker and the Vols got it done, and he is the Longhorndave Sportsman of the Week!
Posted by longhorndave at 9:29 PM