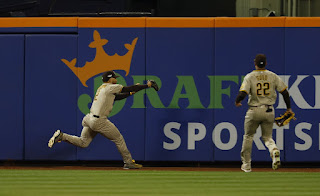 After an action-packed weekend of Major League Baseball Wild Card Playoffs, four teams emerged.  Surprisingly, 3 of the 4 visiting teams pulled off series wins to advance to the League Division Series.  One of the most watched and intense series were the San Diego Padres visiting the New York Mets.  The 101-win Mets finished tied with the Division Champion Atlanta Braves but did not own the tiebreaker and were relegated to fight for their lives.  But it was the talented and plucky San Diego Padres that proved victorious.  Facing two of the most-feared pitchers in the National League in Jacob DeGrom and Max Scherzer (the latter a two-time former Sportsman of the Week), the Padres were able to get ahead early in Games 1 and 3 and put away the frustrated Mets.  The Padres were led but a surprising weapon in Trent Grisham.  Grisham notched 4 hits in 8 AB and added two walks for an OBP of .600.  Two of the hits were HR, including a big one early in Game 1 off of Scherzer to push the Padres lead to 3.  He also had a rally killing catch in CF in Game 3, robbing an extra base hit which would have tightened up the elimination game.  And he scored 5 of the teams 16 runs in the series.  The Padres are loaded with superstars, but it was an unsung hero who stole the stage and is the Longhorndave Sportsman of the Week!
Posted by longhorndave at 8:45 PM