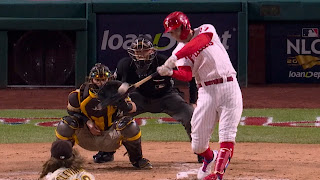 October is one of the great sports months on the calendar.  NBA/NHL starting.  NFL in midseason.  Golf and motor sports with big end of year action.  But it's Major League Baseball that is synonomous with October.  And we have a surprise team and hero.  The Philadelphia Phillies have basically been bracket busting (a la March Madness style) in surging toward the National League pennant.  With several heroes, it was Rhys Hoskins that gave the power to push them to the flag.  Hoskins went 3-7 with 3 HR and 6 RBI over the National League Championship series final two games to seal the deal for the Phillies against the San Diego Padres and punch their ticket to the World Series.  His fourth hit in the series also a HR.  The hits were clutch as well, right when the team needed it.  Cutting a lead to 4-2.  Tying up a game at 6.  Giving his team a 2-run lead.  Never a bad time for a HR, but Hoskins was dialed in, and is the Longhorndave Sportsman of the Week!
Posted by longhorndave at 8:26 PM