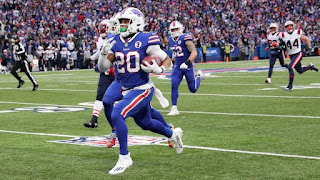 It was an emotional yet exciting week in sports.  The NFL regular season was winding down with exciting final week matchups to decide fates and seeds, but the sports world was captivated and behind the unfortunate medical incident on Monday Night Football which scarily sent Damar Hamlin to the hospital after being revived on the field (twice).  But the Buffalo Bills responded in the early Sunday time window with a kickoff return touchdowby by Nyheim Hines.  Hines took the opening kickoff in a pivitol game (opponent New England Patriots were in a 'win and in' scenario and they were looking for a second seed) and took it to the HOUSE.  After an emotional pregame, Hines showed us that football was still okay to cheer for and no doubt Hamlin would have wanted it that way.  But Hines didn't stop there, taking a SECOND kickoff back for a TD moments after the Patriots fought to take a brief (and I do mean brief) lead.  And again, this wasn't just feel good, it was playoff critical as Bills took the two TDs to a 12-point win and secured a chance for home field until the AFC Championship which may be a neutral site.  Hines turned around a bad situation and made good.  A worthy, Sportsman of the Week!
Posted by longhorndave at 8:43 PM