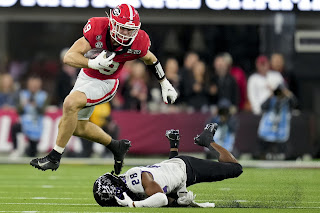 The University of Georgia may be the new Alabama.  But they may be even better than that.  On Monday the Bulldogs cinched their second College Football Playoff Championship in 365 days easily destroying the Texas Christian Horned Frogs 65-7 in a game that wasn't even close.  Georgia used a balance offensive attack on both the ground and through the air to completely mystify the Frogs in the most lopsided championship game in history.  Perhaps no player was more unstoppable than tight end Brock Bowers who was consistently getting open and causing big damage.  Bowers finished the game with 7 catches 152 yards and a TD (also carrying the ball twice for 15 yards), reaching season highs in receptions and total years in the biggest game.  Georgia coaching was criticized for not using Bowers more in the Semifinal game and more than atoned.  Bowers is expected to perform very well at the next level and is the Longhorndave Sportsman of the Week!
Posted by longhorndave at 6:08 PM