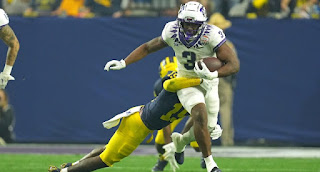 What a weekend of sports and in particular, college football as the crescendo of Bowl Games played out daily with the highlight of the College Football Playoffs on New Year's Eve.  The matchups pitted two near TD favorite undefeated teams against one-loss teams that lost their last games.  Nobody gave Big XII runner-up Texas Christian University (TCU) much of a chance against Big Ten champion and undefeated Michigan in the Fiesta Bowl but the Horned Frogs proved worthy opponents.  With big plays on offense and defense, TCU surged to a 21-3 lead in the first half not flinching at the odds or experts.  Then the second half turned into a slug fest with the teams scoring a nice 69 points.  But the game was controlled by TCU in the running game by hammer Emari Demercado who continued to gash the Wolverines defense carry after carry.  Demercado bludgeoned the vaunted Michigan defense for 150 yards on 17 carries and a TD appearing unstoppable behind a powerful offensive line.  It was Demercado that was the difference in the game when it mattered, and he is the Longhorndave Sportsman of the Week!
Posted by longhorndave at 10:13 PM