As his contract come to a head, I feel compelled to offer some personal thoughts on the Peyton Manning situation. Let me offer some disclaimers: I'm not a doctor, I don't know Peyton, I only know what I've read through the media, but I might be someone who can shed some light on his condition, bear with me. 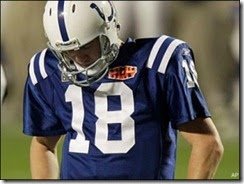 Some requisite background on me. I'm in my late 30's, relatively active (lift weights, run, played softball until recently). On April 25, 2007, I woke up with an injury that I'm still probably not fully recovered from. I had a sharp pain on my right, lower neck region. I mean sharp. Can't move your head sharp. don't know how it happened, still don't know. And instant numbness in my arm down to the fingers. For a month or more. I think it was an ulnar nerve (courtesy of WebMd) as my pinky and ring finger were the most numb. But here are some symptoms that resemble Peyton's.

1) Inability to move head to do things like drive
2) Couldn't sleep normally due to discomfort for month or more
3) Extraordinary and instantaneous weakness in muscles on right side. I'm talking like "can't hold a can of coke without shaking"
4) I never take aspirin or ibuprofen for pain, and I was poppin' em.

I think I tweaked something while lifting. Although some articles attribute to bent elbow as in use of a mouse. But mine was so acute. But I was sidelined from lifting weights or running for a month. Running, just the impact of the ground shot pain through it. Weights I couldn't assume a position without pain. I wasn't sleeping, I only had like two sleep positions which freed the nerve to not cause acute pain. But as one does during sleep, you roll over by instinct and then sharp pain, and you're done (up for 30 mins trying to dull pain, then resume one of two positions). I slept sitting up for a lot of that month.

The pain started in the shoulder with numbness down the arm. Then, over the next few weeks, the center of pain migrated down my back, but was dull, not acute. Numbness was not as prevalent (100%), but still pervasive (25% - 50%).

Weightlifting was the smoking gun as to the effects. Triceps and chest were shot. My left (normally weakest) arm could do 30 lbs on some tricep lift exercises. Right arm (recently numb) shook at 10 lbs (before the injury, all was even). I went from bench pressing 200+ easy to 135 being too much for my right side. Overnight. And on my lifts, the left lifted easy, the right was a struggle (to this day, my lifts go left up first, then right).

I didn't opt for a doctor, everything I read about pinched nerves was that it was difficult to fix. Peyton had a number of surgeries, but I'm hearing his arm is a noodle and he can't recover like one would expect him to. The parallels seem too similar.

Probably 3 years before I could lift close to even on both arms. And 4 years until I could bench 200 lbs again. Little by little I got it back. I still have a couple of sleep positions that relax that nerve more than others. And I still (5 years later) have a lot of tingling and twitching on that side, particularly after exercise. I've cut way down on my back exercises, I feel the pulling with those muscles aggravates.

I don't think Peyton has exactly what I had, but if a nerve like mine was pinched, the instantaneous atrophy is not something that can be overcome without surgery. With surgery, he seems to be struggling.

You hear things like a ballplayer having a pinched nerve on Sunday, then is back by Wednesday. This is a whole different ballgame if it's like mine.

I hope he can come back, but my gut feeling is that at his age, this season is out, maybe next he can pull it together. But arm strength is so important, I'm just not sure.
Posted by longhorndave at 9:28 PM