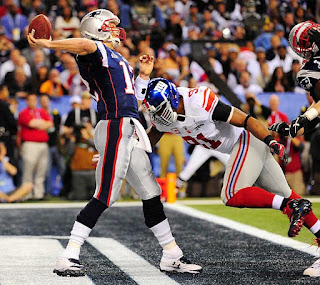 While most people would go with the Super Bowl winning QB, I'm going to lean toward the trenchman who made two key plays that, in my opinion, decided the game. This week's Sportsman of the week is Justin Tuck. He definitely changed the complexion of the game, not only on the safety grounding call, but his handshake at the coin toss (you surely saw it). Then he secured the first two points, then his sack of Brady on 3rd down on the final drive, while not forcing the ball over right then, it put the Pats in a minus position that they didn't recover from. With all due respect to Manning, <300 yards on a porous defensive team and only one TD. This week's Sportsman of the Week is Justin Tuck!
Posted by longhorndave at 9:56 PM