The sports world is busy and diverse these times of year, with NHL and NBA in mid-to-late season form, NCAA Hoops on the precipice of March Madness, Daytona (maybe tomorrow), and lets we forget about the NFL Combine. But this week, one athlete stood head and shoulders above 63 other competitors in his contest, personally defeating six of them. While it's not a Major, the Accenture Match Play Championship is a highlight of the Golf Season, this week's Sportsman of the Week is Hunter Mahan. 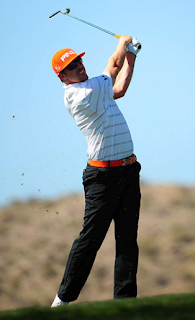 The 29 year old alumnus of Oklahoma State (and Southern Cal) ended half of his matches before the 16th tee and upstaged the final day presumed stars of McIlroy and Westwood capturing the title for the U.S. for the first time since Tiger Woods in 2008. Congratulations, Hunter, you are the Longhorndave_on_sports Sportsman of the Week!
Posted by longhorndave at 8:13 PM