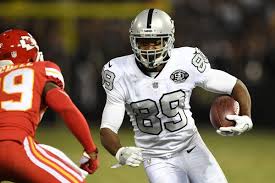 With MLB Baseball postseason entering it's climax, it's easy to forget that NFL Football is in full swing.  We're only in Week 7, but it seems as if all teams have been written off, or considered favorites for the Super Bowl.  Parity.  The Oakland Raiders appear to be bouncing back after a rough start to the season.  Partially due to the injury to Derek Carr.  Nobody is more happy he's back than Amari Cooper.  In what could be a season-saving game, Cooper had a huge day, with 11 catches for 210 yards and two TD.  The best part, the Raiders won 31-30 over the rival and first place Kansas City Chiefs with a TD on the final play and the PAT to follow.  Cooper was a man who could not be contained, and is the Longhorndave Sportsman of the Week!

Note, this is Cooper's second nod, and he's the second player to get this honor in both college and pro (Le'Veon Bell)
Posted by longhorndave at 8:57 PM