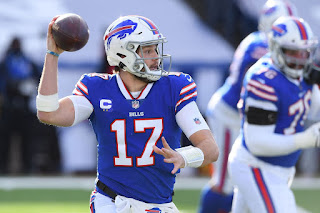 For the first time in National Football League (NFL) history, a playoff weekend featured six (6) games of action and all but two of the playoff teams.  And it was spectacular.  The games featured several veteran quarterbacks presumably in their final couple of years (Brady, Brees, Roethlisberger, Rivers) but it was breakthroughs by younger players that stole the show.  Maybe none more than Buffalo Bills phenom Josh Allen.  Playing in his first home playoff game, his efforts gave Buffalo their first playoff victory in 25 years with a thrilling victory over the Indianapolis Colts 27-24. Their last victory was shortly after their four consecutive American Football Conference championships and even before the "Music City Miracle" heartbreaking defeat two decades ago.  Allen threw with pinpoint accuracy completing 26/35 passes for 324 yards and 2 TD.  But it may have been his legs that were more important.  With a rushing game stuck in neutral, Allen ran for 54 yards on 11 carries and another TD to lead his team in rushing as well.  All in all he accounted for 355 of the Bills 397 yards (taking away the sacks) and all three touchdowns.  Allen looks all the bit of a bargain at number 7 overall draft pick in 2018 and has he and the Bills poised for many more playoff victories.  Perhaps this Sunday against the Baltimore Ravens. Josh Allen is the Longhorndave Sportsman of the Week!
Posted by longhorndave at 5:52 PM