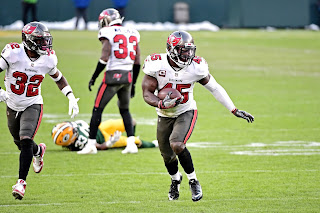 What a weekend of NFL Playoff Football with the the Tampa Bay Buccaneers and Kansas City Chiefs headed to the Super Bowl crowned in their respective conferences.  While the quarterbacks stole the headlines for good reason, with 3 of the 4 being former MVPs, it was a defensive player who may have been the reason his team won.   Buccaneers LB Devin White was a force that could not be contained for the second week in a row.  He was a tackle machine with 15 total tackles, including 9 solo, which was double the other players on the field for either team.  But perhaps his most opportunistic game changes was when he scooped up a fumble on the Green Bay Packers initial possession of the second half and returned it 21 yards to the Green Bay 8 yard line.  One play later, the Bucs were up 28-10, a lead they would never relinquish on their way to a narrow 31-26 win.  Defensive players usually relinquish the accolades to the offensive weapons but not this week.  Devin White is the Longhorndave Sportsman of the Week!
Posted by longhorndave at 7:00 PM