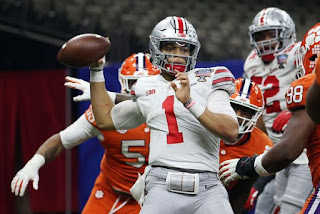 Amazing we enter our 10th year of Sportsmen and Sportswomen of the week, we continue where we started.  College Football Bowl Games.  One of the highlights of the sports calendar.  Admittedly 2020-21 was a tough year for Bowl Games, but they ended in a surprising star in the College Football Playoff (something that didn't exist 9 years ago).  The Sugar Bowl was dominated by Ohio State and led by who may have given the most clutch performance in 2020-21.  Buckeyes quarterback Justin Fields shredded the favored Clemson Tigers defense and made victory look easy.  After a completely lackluster, even poor performance in the Big 10 title game, Fields came to life.  And played the game of his life.  Fields completed 22/28 passes for 385 yards and six touchdowns.  Six.  He also ran for 42 yards just to keep the chains moving.  Time and time again he dropped back and made key passes to guys in coverage to break the will of the Tigers.  All this after suffering what appeared to be a game ending rub injury on what was ruled a controversial targeting on Clemson's James Skalski who (according to referee and replay ruling) "targeted" Fields in the ribs with his helmet leaving him wincing upon walking or throwing and Skalski sidelined for the rest of the game.  But Fields persevered in an heroic effort.  They'll need a repeat performance to beat the Alabama Crimson Tide in the National Championship game, but Fields was definitely the man of the match and the Sportsman of the Week.
Posted by longhorndave at 9:16 PM