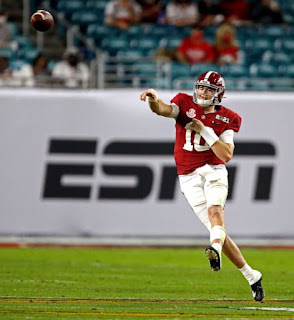 What a performance on what may go down as the greatest college football team of all time.  Alabama completed their perfect season with a thrashing of third ranked Ohio State Buckeyes 52-24 in a game that was pretty much over by halftime.  Two players stood out statistically and I'm giving the Sportsman of the Week nod to the one that played the entire game.  Alabama QB Mac Jones was near perfect in a technical dismantling of the Buckeyes defense.  He finished the evening only missing on 9 passes on a 36-45 virtuoso performance, tallying 464 yards (including 353 in the first half) and 5 TD.  His favorite target was Heisman Trophy winner DeVonta Smith who caught almost half the yards at 215 on 12 catches for 3 TD.  But after Smith left with an injury at halftime, Jones kept the pressure on with a back-breaking TD pass at the end of the 3rd quarter to put the Crimson Tide up by 20 or more points permanently.  It was close choosing between the two, but surrounded by superstars, Jones was the leader and a deserving Longhorndave Sportsman of the Week!
Posted by longhorndave at 10:03 AM