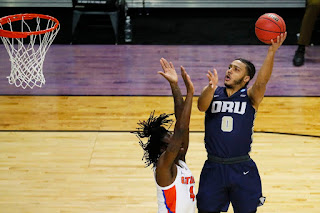 What an opening weekend of March Madness.  In an unpredictable season impacted all along the way with games rescheduled and cancelled but culminating in one of the biggest events in American Sports.  The NCAA Men's and Women's Basketball tournament.  This time last year sports fans ate a bitter pill when there was no possible path forward for the tournament as the country grappled with cancelled events and lock downs.  But the tournament was wide open on the first weekend.  On the Men's side, Oral Roberts Golden Eagles were one of the surprise teams, shocking one of the short-list tournament favorite Ohio State Buckeyes in overtime.  Not to be outdone, the 15-seed proceeded to defeat the Florida Gators in the second round.  Sweet 16 ticket punched.  They were led by experienced and talented forward Kevin Obanor.  The junior number "0" led the team with an average of 29 points over the first two games, and not only that, added 11 rebounds in both games.  He added 4 steals in the Florida win as well to be a complete stat sheet filler.  Oral Roberts next gets third seeded Arkansas.  Will they add another major program to their belt?  Our Sportsman of the Week Kevin Obanor will lead the Golden Eagles and make a good run at it!
Posted by longhorndave at 9:14 PM