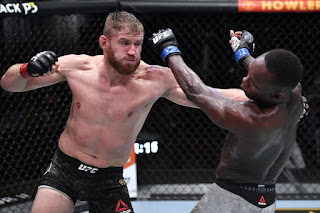 Combat sports are in a transition phase, as traditional boxing (on the 50th anniversary of Ali-Frazier I) give way to what might be considered more action packed (read, shorter, fewer rounds) mixed martial arts.  The Ultimate Fighting Championship (UFC) has continued to evolve in style, substance, and quality to take the main stage.  And last Saturday's UFC 259 (doesn't quite have the roman numerals like Super Bowls) provided action and surprise.  The action was defending champion Jan Blachowicz (Poland) versus the previous undefeated Israel Adesanya (Nigeria) in the Light Heavyweight (oxymoron anyone, dudes are 200 pounds) division.  Blachowicz was a +185 underdog but controlled Adesanya to demonstrate superiority.  Per the fight stats showed clear dominance for Jan as he had more strikes, significant strikes, take downs (3 to 0), and match control.  Resulted in an easy unanimous decision.  The 38-year old Blachowicz used his experience this time, but Adesanya is probably a champion of the future.  Great historical matchup, and a worthy Sportsman of the Week!
Posted by longhorndave at 8:18 PM