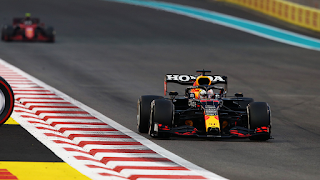 What a finish to certainly will go down as one of the most memorable Formula One racing seasons.  Fans around the world were glad to see a full schedule and two drivers dominated down to the last race for all the marbles.  Only once in the past seven seasons did the F1 Driver's Championship come down to the last race.  But in the Abu Dhabi Grand Prix, the 22nd race of the 2021 season (most of any season), 7-time total, and 4-time defending Champion Lewis Hamilton on the Mercedes team and upstart Max Verstappen were level in points.  Winner.  Takes.  All.  And then.  It came down to the final lap.  With Hamilton firmly in control of the race, the safety car leveled the gap and Red Bull Racing's Verstappen took advantage.  The Dutchman loaded up on new tires (not available to Hamilton without losing his position) and passed Hamilton early in the final lap and there was nothing the Brit could do (besides protest some of the decisions on the restart which is beyond the scope of this Blog.  And Verstappen won his first Championship at age 24, just a year older than Hamilton when he won his first in 2008.  Is this a changing of the guard?  Or will Hamilton get the first back to win his eighth championship in 2022?  Stay tuned, that season might top this one.  But in the meantime, Max Verstappen is the 2021 Formula One Champion and the Longhorndave Sportsman of the Week!
Posted by longhorndave at 8:21 PM