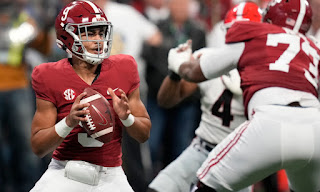 What a grand finale for College Football as the Conference Championships took center stage, with the best teams having a last chance to impress the College Football Playoff committee, the best players garnering last minute Heisman Trophy votes, and settling the entire bowl season.  No game was bigger than top ranked Georgia Bulldogs going against their SEC nemesis #3 Alabama Crimson Tide looking for their first win in 7 tries.  It will have to wait until the eighth.  Rare underdog Alabama took it to the Dawgs led by their sophomore quarterback phenom Bryce Young.  Already in the conversation for Heisman trip to New York.  Now the odds-on favorite to raise the trophy.  Young rose to the occasion in their biggest game hitting 26 of 44 passes for an SEC Championship Game record 421 yards and 3 TD.  Perhaps better, no interceptions or fumbles lost (he ran for another 49 yards and a fourth TD).  The Tide got the number one seed in the Playoffs and Young looks poised to lead the Tide to yet another Championship after he likely takes home the Heisman hardware.  Young is the Longhorndave Sportsman of the Week~!
Posted by longhorndave at 8:44 PM