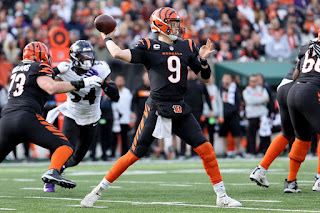 It's getting down to crunch time in the National Football League with just three games left coming into the weekend and log jams at the top of several Divisions as teams vie for playoff berths.  No Division is more tightly bunched than the AFC North in which the best team was 8-6 and the worst was 7-7.  Anybody's division.  The Cincinnati Bengals stepped up on the rising right arm of their top overall draft pick in 2020, Joe Burrow.  The former Heisman Trophy winner torched the depleted Baltimore Ravens for 525 yards and 4 touchdowns in a dominating 41-21 thrashing of their Division Rival.  The win puts the Bengals up a full game on the entire Division including tiebreakers on all teams except the Browns.  They will likely make their first playoffs since 2015 and seeking their first playoff win since 1990.  For the second time, Joe Burrow is the Longhorndave Sportsman of the Week!
Posted by longhorndave at 6:00 PM