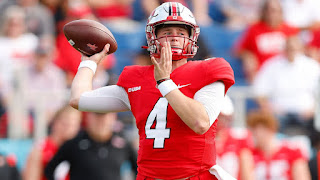 Nothing less than the most productive season in Division 1, Football Bowl Subdivision history.  That is what our Sportsman of the Week earned in 2021.  Bailey Zappe of Western Kentucky sealed his season with a 422-yard, 6 TD performance in a Boca Raton Bowl romp against Appalachian State.  The Hilltoppers torched the Mountaineers for 52 points through 3 quarters in the record-breaking performance.  overall, Zappe ended the season with 5,967 yards and 62 touchdowns, breaking records of Texas Tech's B.J. Simons 5,833 in 2003 and Louisiana State's Heisman and National Champion Joe Burrow's 60 TDs in 2019.  Zappe's Hilltoppers started the season a meager 1-5 with competitive losses to bowl teams like Michigan State, Army, and Texas San Antonio.  But they then went on a run through the second half of October through the end of the season winning 8 out of 9, dropping only a rematch to UTSA in the Conference USA Championship Game.  Zappe's name is etched in college football lore and he is the Longhorndave Sportsman of the Week!
Posted by longhorndave at 4:30 PM