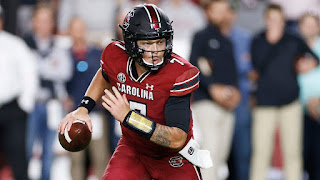 It was a topsy-turvy weekend of college football in which many of the top playoff contending teams struggled and one seemingly favorite went down.  Hard.  Tennessee rolled into Columbia, South Carolina, as 22-point favorites and their chanced of making the college football playoffs seemed more dependent on Big 10 and Big 12 losses ahead of them.  South Carolina Gamecocks QB Spencer Rattler took that personally.  South Carolina struck pay dirt early and often in an absolute bludgeoning of the SEC East runners up.  After USC of the East jumped to a 21-7 lead in the first quarter, the track meet began, and Tennessee battled back to cut the Cocks lead to 35-31 late in the 3rd quarter.  But South Carolina scored four straight TDs, two on Rattler passes.  Overall Rattler threw 6 TD passes on 30-37, no picks, and 438 yards.  Tennessee will be left licking their wounds in a Bowl game in Florida on New Year's Day, instead of in the playoffs on New Year's Eve.  Thanks to Rattler, the Longhorndave, Sportsman of the Week!
Posted by longhorndave at 6:28 PM