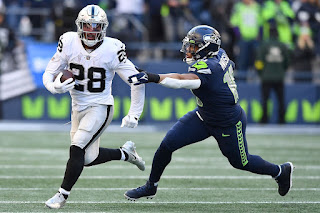 Three-hundred-yard performances just don't happen in the NFL, but we saw one this week.  From an unlikely source, certainly for the team if not individual.  Josh Jacobs of the Las Vegas Raiders shredded a playoff contending Seattle Seahawks defense for 229 yards on the ground plus another 74 through the air for 303 total yards.  He led the Raiders in both yardage categories.  Add two touchdowns, the last of which was epic.  An 86 yard "walk off" in overtime.  After being pinned inside their own 20-yard line with 4:20 left, Jacobs ended it all.  Busting through the middle it was a track meet to the goal line and he would not be denied.  Ballgame.
Posted by longhorndave at 9:02 PM