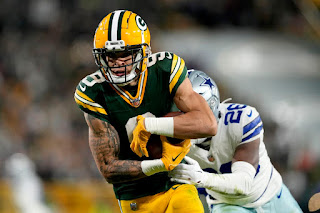 In a really fun and amazing weekend of NFL Football, two traditional powerhouses squared off in the late TV window and thrilled audiences.  With the proud Green Bay Packers licking their wounds after 5 straight losses and the sky-high Dallas Cowboys in the frozen tundra, the Packers acted like a cornered wounded animal.  While Aaron Rodgers was his usual steady self, it was rookie wide receiver Christian Watson that emerged as a potential future superstar in the league.  Watson, who had been plagued with uneven play over the first half of his rookie season, emerged and showed why the Packers believed he can help bring the Packers back to the playoffs.  After a disappointing 88 yards on 10 catches in his first six games, he emerged with four big catches, including three touchdowns in the crucial 31-28 win to keep Green Bay in the playoff hunt.  His 58 yard catch in the 2nd quarter seemed to boost both the Packers and his confidence and they emerged as winners of their biggest game of the year.  Will Green Bay make the playoffs?  If so, it'll be due to Watson's emergence.  He is a worthy Longhorndave Sportsman of the Week!
Posted by longhorndave at 9:04 PM