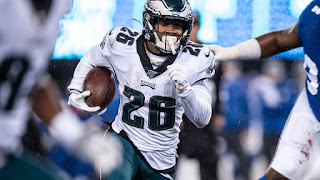 The Philadelphia Eagles have been a surprise dominant team and continue to etch their path toward the NFL Playoffs.  Taking no prisoners in what is probably the NFL's toughest division, the Eagles put another notch in their belt on Sunday.  On the road.  The Eagles took control early behind both MVP front-runner Jalen Hurts and Miles Sanders.  It was Sanders who the Giants couldn't stop.  Sanders scored the opening salvo with a TD in the first quarter and finished off the Giants with a TD early in the fourth.  By then, it was 41-14.  Overall Sanders ran unleashed for 144 yards on 17 carries and those two TDs.  The balance Sanders brings to the offense, with the playmaking ability of Hurts and a WR room the envy of Pro Bowl team or Hall of Fame wing.  The Eagles look poised for another Super Bowl title to follow up their 2017 title (just like the Houston Astros).  Led by Sanders, the Sportsman of the Week!
Posted by longhorndave at 8:38 PM