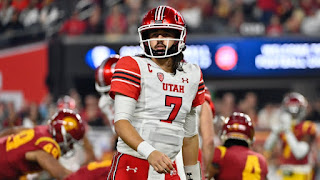 It was a veritable buffet of college football in the first weekend of December and the games delivered surprising results.  No result shook the college football landscape more than the Utah Utes upsetting number four and presumable playoff bound Southern California Trojans.  While oddsmakers had this as a close one, most experts were already penciling in the Trojans to a playoff spot.  Not so fast.  Utah quarterback Cam Rising put together a flawless effort in answering a huge deficit to win the Pac 12 Championship Game going away.  Trailing 17-3 and within 4 minutes of halftime, Rising brought the Utes offense alive.  Two gut punch drives in the second quarter, Rising led Utah down the field for 144 yards and two TDs to tie the game up just before halftime.  He then led Utah to 10 more unanswered points to take a 27-17 lead they would not relinquish.  Overall Rising through for 310 yards and 3 TDs.  No fumbles just one sack in a masterful control of the game.  His effort earned the Utes a trip to the Rose Bowl.  Cam Rising is the Longhorndave Sportsman of the Week!
Posted by longhorndave at 8:46 PM