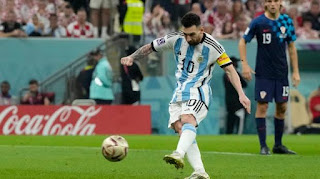 What a week and what a weekend for sports in the United States and around the world.  No more eyes were on any event than the 2022 FIFA World Cup Semi-finals and finals.  And a legend emerged, cementing his legacy as one of the greatest of all time.  Lionel Messi led his strong, but not favored, Argentina squad to a thrilling victory (3-3, 4-2 PK) over defending champion France in the World Cup Finals as well as Croatia (3-0) the semis.  Messi netted the first goal (on a penalty kick) in the Semis and two goals (first one off a PK) in the Finals.  It was his assist for the third goal in extra time that helped Argentina push it to Penalty Kicks.  Messi netted his opportunity in the PK shootout as part of Argentina's 4-2 victory.  He ended up with 21 World Cup career "contributions" (8 goals, 13 assists) the most since 1966.  He's the best of the era and now has a World Cup to hoist.  The Longhorndave Sportsman of the Week!
Posted by longhorndave at 7:41 PM