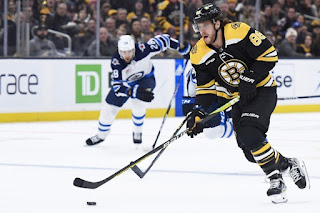 An action-packed week of sports spanned the Week before Christmas with Bowl Season ramping up, the NFL in playoff push form (not to mention frigid weather), and the NHL starting to see some separation of teams.  We turn to hockey for the first time this season and no team has been more dominant than the Boston Bruins.  Leading the Eastern Conference by six points at 27-4-2 through 33 games they seem to be setting up for a summer Cup run.  Right winger David Pastrnak is leading the highest scoring offense in the NHL with 24 goals and 23 assists.  This week in three games, he had four goals and an assist in three wins, including ones over Winnipeg and New Jersey, two projected playoff teams.  The 26-year-old Czech-born star is exceeding the best year of his career and looks poised to jump to elite stardom and is the Longhorndave Sportsman of the Week!
Posted by longhorndave at 6:13 PM