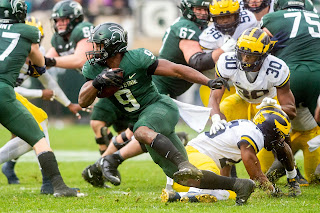 No player was scarier on Halloween Weekend for defensive players than all world running back Kenneth Walker III as he single handedly won the intrastate rivalry, dealt the Michigan Wolverines their first loss of the season, and surged toward the top of the Heisman Trophy favorite board.  The Michigan State Spartan shredded the Wolverines defense for nearly 200 yards (197 to be exact) and five, read that FIVE touchdowns.  It was all the offense the Spartans needed to outscore the Wolverines 37-33 and move to 8-0 themselves and into the Big 10 title discussion.  Trailing Michigan 30-14, Walker III ran to pay dirt three times in the second half (including two 2-point conversions) from 1 yard, 58 yards, and 23 yards to deflate the favored Michigan squad.  An impressive effort in a huge game, nets Walker III our Sportsman of the Week!
Posted by longhorndave at 9:56 PM