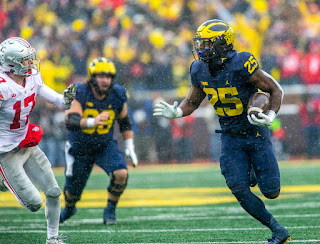 What a weekend for college football as the final regular season week produced huge matchups and lots of hate.  Perhaps no more hate north of Alabama was felt in Ann Arbor, Michigan, as the state's beloved Wolverines took on the hated Ohio State Buckeyes.  While the rivalry is storied and easily Top 5 in college football no matter the circumstance, the stakes were significantly higher this week as Michigan was riding an 8-game losing streak against the perennial powerhouse Buckeyes and the teams were both ranked in the Top 5 coming in.  Big 10 title on the line.  Playoff spot on the line.  Enter cold weather and snow and it was the American dream for a football fan.  But this turned into a nightmare for the Buckeyes.  In Big 10 football style, Michigan lined up and took control of the game at the line.  The beneficiary was Hassan Haskins.  He put the team on his back with 28 carries for 169 yards and 5 TD, personally outscoring the Buckeyes in the 42-27 Wolverines victory.  And it wasn't the kind of effort where it was a few long runs.  Every time Michigan had the ball, Haskins pounded for 5 yards, 7 yards, 2 yards, 6 yards shedding tacklers on the way to setting up his team for good 3rd down distance.  Michigan scored a TD on its last 5 possessions that didn't end the half keeping Ohio State at bay.  What a win for Michigan and while the Sportsman of the Week goes to Haskins, his offensive line deserves much of the credit as well!
Posted by longhorndave at 9:13 PM